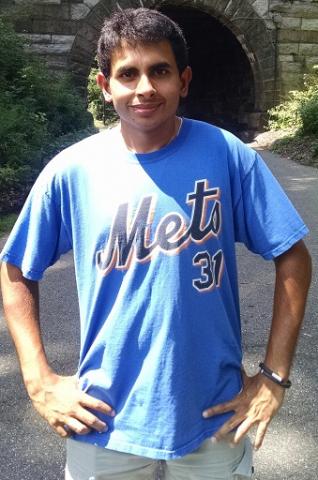 Sudesh Kalyanswamy  (UCLA Math Graduate Student, Professor Chandrashekhar Khare) has been awarded the 2015-16 Charles E. and Sue K. Young Graduate Student Award. Given by the College of Letters and Sciences to four graduate students annually, the award acknowledges students' academic achievements, research, and service to the University and community. This is the third year in a row the award has gone to a UCLA Mathematics graduate student.

"I've known I wanted to do number theory since I was a kid. Numbers and their various patterns fascinated me, particularly prime numbers. At Cornell as an undergraduate, I worked with Prof. Ravi Ramakrishna who is good friends with my current advisor, Prof. Shekhar Khare. I met with Prof. Khare when I visited UCLA during the open house and knew that I wanted to work with him. He was one of the primary reasons I came to the west coast after spending my entire life up until that point in New York.

I now work with him on applying the techniques Wiles used to prove Fermat's Last Theorem to other situations involving Galois representations.

Outside of research, my primary passions are teaching, tennis and running. I also obsessively follow the New York Mets baseball and New York Giants football teams. After grad school, I hope to continue in academia to try and enjoy both teaching and research."