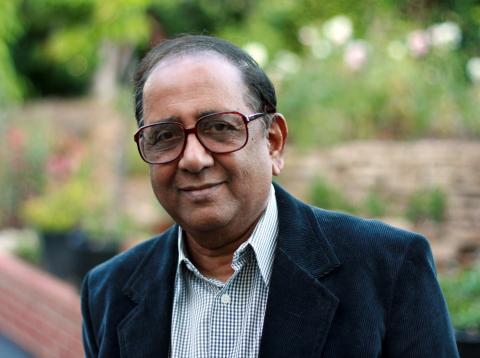 It is with great regret that the Mathematics Department must note the passing last week, at age 81, of our colleague Professor Emeritus and Distinguished Research Professor Veeravalli Seshadri Varadarajan.

Professor Varadarajan, known to all as Raja, led a research career of lasting international influence.  He was in active service at UCLA  for 49 years until  his  retirement in 2014.  His research activity continued until his death.  At UCLA, with balanced emphasis upon research, exposition, teaching and mentoring he was a superb colleague who inspired respect and devotion among those lucky enough to work with him.  He did sustained and significant work in at least 5 areas over his long career. His international recognitions include an honorary doctorate in physics from the University of Genoa, and the Lars Onsager medal from the Norwegian University of Science and Technology.  For his 60th birthday, and his retirement, conferences were held in his honor. He was  a speaker at the International Congress of Mathematicians in 1974, a high honor for a mathematician at any stage of career.

Born in 1937 in Bangalore, India,  Raja received his PhD in 1960 from  the Indian Statistical  Institute (ISI) at Kolkata, where he studied under  C. R. Rao.  With the others of the “famous four” from ISI  in this period,  the gifted young researchers K.R. Parthasarathy, R. Ranga Rao, and S.R.S. Varadhan, Raja is regarded as someone who played an early important role in the development of probability theory in India.  Raja was a professor at ISI from 1962 to 1965.  In 1968 he published an influential monograph, the first of many, Geometry of Quantum Theory which was based in part on his research to that date.  Its second edition remains in print.

In 1965, at age 28, Raja came to UCLA as Associate Professor.  He had come  from India shortly before with his wife Veda.  She later did graduate study at UCLA, earning a master’s degree in atmospheric sciences in 1976.  At UCLA Raja found Richard Arens, Donald Babbitt, and Robert Blattner to be colleagues with sympathetic interests.  Indeed, by that time  Raja’s primary interest was turning to  the theory of semisimple Lie groups and their representations, and especially the transformative theory of Harish-Chandra who became a friend.  Over the next 25 years, he and his collaborators  T. J. Enright, J.J. Duistermaat, R. Gangolli, J. A. C. Kolk and P. C. Trombi, made diverse important contributions to this developing theory.  Raja also wrote a number of excellent  expository articles on Harish-Chandra’s work.

Continuing his commitment to exposition, Raja wrote several textbooks for graduate students. His 1974 Lie Groups, Lie Algebras, and Representations  was  the first of its kind and remains a standard reference text.  His 1989 An Introduction to Harmonic Analysis on Semisimple Lie Groups is used by many as well. In addition, with R. Gangolli, he published in 1988 a 385 page research/expository monograph  in the famous Ergebnisse series of the Springer press.

Inspired by problems arising from Harish-Chandra’s  theory,  Raja collaborated with UCLA colleague Don Babbitt, from 1983 until 1991,  in basic research on the theory of  meromorphic differential equations with irregular singular points. They published six articles, and an Asterisque monograph in 1989 on the topic. This work brought him for the first time, as an active user,  into contact with Grothendieck’s theory of schemes and it  had a lasting impact on his perspective.  Around this time, Raja’s concerns returned (they had never really left !)  to quantum theory.  He became interested in the new theory of quantum groups,  in  problems of quantization, and in novel topics such as arithmetic, including non-archimedian,  physics. He published numerous research and expository articles on all these topics, and hit high points with his  2004 exposition Supersymmetry for Mathematicians: an introduction, which became an AMS ‘bestseller’, and his 2006 collaborative paper which defined and developed the  notion of a unitary representation of a Lie supergroup. After retirement, Raja continued  research. With R. Gangolli, he edited important unpublished manuscripts of Harish-Chandra in which theorems announced by Harish-Chandra before his early death are given proof. This volume forms now forms the fifth of Harish-Chandra’s collected papers. The first four volumes were edited by Raja alone.

Throughout his career, Raja had a strong interest in the origins of the ideas of mathematics and physics and he published numerous articles in this area.  In 2006 he published, also with the AMS, the 300 page  Euler Through Time: a new look at old themes. This highly readable book is meant for the contemporary mathematician and shows how Euler’s work connects to important themes of current research. Finally, in 2011 he published the book Reflections on Quanta, Symmetries and Supersymmetries  which was  called “brilliant, stimulating and informative” by a reviewer.  This was the last of his book length publications but there are three volumes of his selected papers which appeared in 1999 (first volume) and in 2013. However, article publication continued and even today there is one in late stage  of review at a journal.

In 1992 Raja had a major heart attack that left him physically weakened for life. It led him to a change of perspective on  research. He felt that he could now explore his research interests more freely than before. His  new perspective brought him, in addition to the great productivity noted above, many graduate students whose PhD’s he supervised. He said he had learned to help a student discover and follow their own path, not impose his own.  Twelve of his seventeen research students began and finished in this period, which ended only with his retirement in 2014. Raja wrote  numerous articles with  students and former students and  was warmly and deeply devoted to them, his friends, and his collaborators. For decades, he and Veda  welcomed all into their home in Pacific Palisades with its beautiful garden and pine trees.

Raja was  Managing Editor of the Pacific Journal of Mathematics for 3 decades. He was an excellent captain  of this well-known  journal. It will devote an issue to articles dedicated to his memory. He also was the first one to manage the Distinguished Lecture Series. Raja was perfect for this task: he knew well a great many transformative researchers and the list of his speakers is a Who’s Who. The Department gave him an award for this contribution.

With Veda, Raja made in March 2019 a 1 million dollar gift to UCLA for creation of a durable visiting Ramanujan Professorship in the Mathematics Department.  It is  in honor of the great Indian mathematician Srinivasa Ramanujan.

Outside of mathematics, Raja loved classical Western and Indian music. Mozart was his particular favorite. He was very fond of mystery novels, especially of the English genre, and also of television shows with such plots. Raja also loved sports. Although cricket had been his first passion, in Los Angeles he became a serious Lakers fan.  Perhaps above all other recreations, he loved good conversation with friends. He had a prodigious memory and could move effortlessly in conversation between his favorite themes.

It has been one  of this writer’s greatest rewards to have had the friendship of Raja Varadarajan. I will cherish the memory of Raja’s  grace,  humor, intelligence, and  fine guidance for the rest of my life.  He is deeply missed by me and many others.