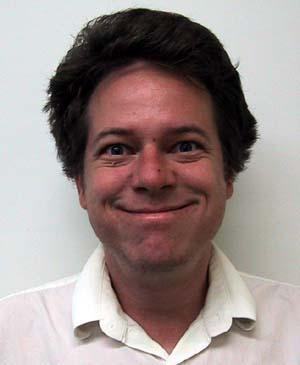 Following the completion of a brilliant PhD thesis at UC Berkeley on Torelli subgroups of mapping class groups, Geoffrey Mess joined the UCLA Mathematics Department as a Hedrick Assistant Professor, a visiting position reserved for top young PhDs from around the world.  He joined the regular faculty in 1988 as an Assistant Professor. He rose to prominence in the areas of topology and geometric group theory by making a number of deep contributions to these fields.  He laid the basis for the solution of the Seifert conjecture by Casson and Gabai. His joint work with Bestvina on torsion-free Gromov hyperbolic groups has produced what is now known as the Bestvina-Mess formula relating the cohomological dimension of such a group to that of its boundary. Another of his celebrated results, on symmetries of Lorentz spacetimes of constant curvature, is a theorem that bears his name.  Mess was awarded a Sloan research fellowship in 1990, and promoted to Associate Professor in 1992.  He left a legacy of seven graduate students who have completed theirs PhDs under his supervision at UCLA: Emily Hamilton (1995), Iakovos Iliadis (1994), Havrenik Mherian (1990), Maria Morrill (1996), Eleanor Rieffel (1993), Kevin Scannell (1996) and William Sherman (1993).

Geoffrey Mess was born in Montreal on February 19th, 1960 to Annette and David Mess.  He entered University of Waterloo at age 16, graduating with a Bachelors in Mathematics in 1980.  Geoff's doctoral thesis was supervised by Andrew J. Casson and John R. Stallings, Jr. Geoff leaves behind a brother, Derek Mess, and a nephew, Dylan Mess, both of Cambridge, MA.

Beyond mathematics, Geoff's interests included physics, world history, languages, kayaking, hiking and backpacking. He hiked Vermont's Long Trail, as well as hundreds of miles in the Sawtooth Mountains and the Canadian Rockies.

Goeffrey Mess battled illness for much of the past 20 years.  The illness stole away his research productivity first, and then succeeded in stealing him from us.  He will be remembered and missed.