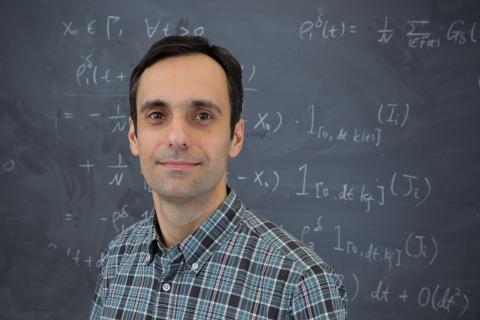 The 2019 E.H. Moore Research Article Prize will be awarded to Ciprian Manolescu, University of California, Los Angeles, for the paper "Pin(2)-equivariant Seiberg-Witten Floer homology and the triangulation conjecture," published in the Journal of the American Mathematical Society (Vol. 29, No. 1, Jan. 2016, pp. 147-176).

This paper resolves the Triangulation Conjecture, showing that there are topological manifolds that do not admit a simplicial triangulation in each dimension greater than 4. One expert referred to this as a "landmark article." Moreover, the techniques from the paper are already being applied to answer other questions in low-dimensional topology, for example regarding the homology cobordism groups, and they've inspired a related theory of involutive Heegaard Floer homology.

I feel very honored to receive the E. H. Moore Research Article Prize from the AMS. The main result of the paper is the existence of non-triangulable manifolds in dimensions at least five. In principle a low-dimensional topologist like me could have no hope of proving such a result. Luckily, in the 1970s, David Galewski, Ron Stern and Takao Matumoto managed to reduce this statement to a conjecture about the homology cobordism group in dimension three, and this is the conjecture I proved. They deserve more than half of the credit for the final theorem.

I would like to thank my mentors Peter Kronheimer, Mike Hopkins, and Lars Hesselholt. With their help, during my student years at Harvard I developed a stable homotopy version of Seiberg-Witten Floer homology. I found a few applications for this construction back then, but the theory lay more or less dormant for the next decade. In 2012 I started thinking about homology cobordism, and I then realized that by incorporating an extra symmetry into my old construction I could get new information. The result was the article cited for this award.

I am happy to see that, in the past few years, several young mathematicians have further developed the techniques from my paper to yield even more insight into homology cobordism. I would particularly like to acknowledge the contributions of Irving Dai, Kristen Hendricks, Jennifer Hom, Tye Lidman, Francesco Lin, Jianfeng Lin, Matt Stoffregen, Linh Truong, and Ian Zemke. It was a pleasure having some of them as collaborators and students. Finally, I want to thank my colleagues at the University of California, Los Angeles for making the department a great place to do research.

Ciprian Manolescu received his doctorate from Harvard University in 2004. After appointments at Princeton University, Columbia University, and the University of Cambridge, he joined the faculty at UCLA, where he is now a professor. He was previously awarded the Frank and Brennie Morgan Prize, a Clay Research Fellowship, and a European Mathematical Society Prize. In 2017 he became a Fellow of the American Mathematical Society, and in 2018 he gave an invited talk at the International Congress of Mathematicians.

About the Moore Prize

The E.H. Moore Research Article Prize is awarded every three years for an outstanding research article that has appeared in one of the AMS primary research journals (the Journal of the AMS, Proceedings of the AMS, Transactions of the AMS, Memoirs of the AMS, Mathematics of Computation, Electronic Journal of Conformal Geometry and Dynamics, and Electronic Journal of Representation Theory) during the six calendar years ending a full year before the meeting at which the prize is awarded. The 2019 prize will be awarded Thursday, January 17 during the Joint Prize Session at the 2019 Joint Mathematics Meetings in Baltimore.

Find out more about the Moore Prize and see previous recipients.

Full biography, response, and photo are available from the AMS Public Awareness Office.