Abstract: A planar set that contains a unit segment in every direction is called a Kakeya set. These sets have been studied intensively in geometric measure theory and harmonic analysis since the work of Besicovich (1919); we find a new connection to game theory and probability. A hunter and a rabbit move on an n-vertex cycle without seeing each other until they meet. At each step, the hunter moves to a neighboring vertex or stays in place, while the rabbit is free to jump to any node. Thus they are engaged in a zero sum game, where the payoff is the capture time.  We show that every rabbit strategy yields a Kakeya set; the optimal rabbit strategy is based on a discretized Cauchy random walk, and it yields a Kakeya set K consisting of 4n triangles, that has minimal area among such Kakeya sets. Passing to the scaling limit yields a simple construction of a random Kakeya set with zero area from two Brownian motions. I will conclude with an open problem involving the search game when both the hunter and the rabbit are restricted to move along the edges of an arbitrary n-vertex graph.   (Talk based on joint work with Y. Babichenko, R. Peretz, P. Sousi and P. Winkler; Transactions AMS, to appear; http://arxiv.org/abs/1207.6389)

Abstract: A Theorem of Varopoulos-Carne (1985) (see [1] Chapter 13) implies that for simple random walks on infinite graphs of sub-exponential growth, the expected distance from the starting point at time t cannot grow like a power of t strictly greater than 1/2. The proof is a striking elementary application of Chebyshev polynomials. With James Lee in [2] we proved a partial converse:  On Cayley graphs (and other transitive graphs), the exponent is at least 1/2. This is based on a Lipschitz embedding in Hilbert space, as suggested by Anna Erschler in 2005; no direct probabilistic proof is known. Which exponents in [1/2,1] are attainable for random walks on Cayley graphs is an open question, with recent progress by G. Amir and B. Virag, who showed that all exponents in [3/4,1] can be attained. In the last (and independent) part of the talk, I will discuss “rotor walks”, where only the first exit from a node is random and subsequent exits are periodic. Rotor walks in two dimensions were conjectured by Priezzhev et al (1996) to visit about t^{2/3} nodes by time t.  With L. Florescu and L. Levine [3], we can prove this is a lower bound, but no upper bound of order less than t is known.

Abstract: Let G be an infinite group with a finite symmetric generating set S. The corresponding Cayley graph on G has an edge between x,y in G if y is in xS. Kaimanovich-Vershik (1983), building on fundamental results of Furstenberg, Derrienic and Avez, showed that  G admits non-constant bounded harmonic functions iff the entropy of simple random walk on G grows linearly in time;  Varopoulos (1985) showed that this is equivalent to the random walk escaping with a positive asymptotic speed. Kaimanovich and Vershik (1983)  also described the lamplighter groups (amenable groups of exponential growth consisting of finite lattice configurations) where the simple random walk has positive speed  if the dimension of the underlying lattice is at least 3. They conjectured a complete description of the bounded harmonic functions on these groups; In dimension 5 and above, their conjecture was proved by Anna Erschler (2011).

I will discuss the background and present a proof of the Kaimanovich-Vershik conjecture for all dimensions, obtained in joint work with Russ Lyons; the case of dimension 3 is the most delicate. 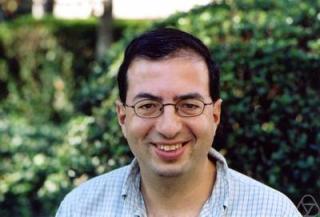 Yuval Peres (born 1963) is a Principal Researcher in the Theory Group at Microsoft Research in Redmond, WA. He is known for his research in probability theory, ergodic theory, mathematical analysis, theoretical computer science, and in particular for topics such as fractals and Hausdorff measure, random walks, Brownian motion, percolation and Markov chain mixing times. He was born in Israel and obtained his Ph.D. at the Hebrew University of Jerusalem in 1990 under the supervision of Hillel Furstenberg.[1] He was a faculty member at the Hebrew University and the University of California at Berkeley.[1]

Peres was awarded the Rollo Davidson Prize in 1995 and the Loève Prize in 2001.[1] He was an invited speaker at the International Congress of Mathematicians in 2002. In 2011, he was a co-recipient of the David P. Robbins Prize. In 2012 he became a fellow of the American Mathematical Society.[2]